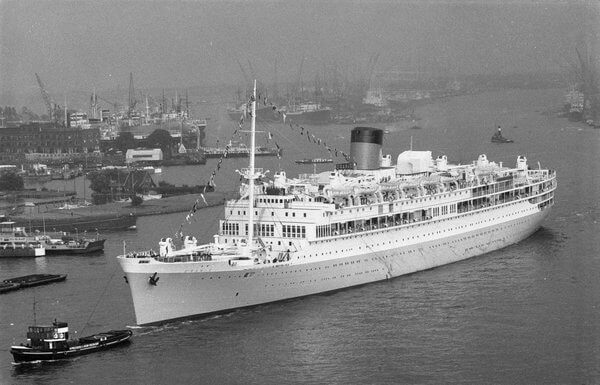 The modern 20,166-ton liner Oranje was completed in early 1939 for the Nederland Line, and began its maiden voyage to Batavia in September of the same year. The outbreak of war between the Netherlands and Nazi Germany found the Oranje at Surabaya, where it remained for over a year, owing to the uncertain world situation. In early 1941, the Dutch government-in-exile offered the ship to the Australian and New Zealand governments as a hospital ship, an offer that was quickly accepted. Initial conversion of the vessel for its new role took place at Batavia, and the work was completed at Sydney.

Capable of 26 knots, Oranje was at the time the fastest hospital ship in the world, and represented a valuable addition to the Allies’ medical capability. Originally staffed and operated by a Dutch crew, with a small complement of New Zealand and Australian staff, it later carried a largely Australian, and eventually a largely New Zealand medical staff. The Oranje completed 41 war voyages, covering over 382,000 nautical miles and carrying some 32,461 patients. It was then used to repatriate many Dutch internees from the NEI to the Netherlands.

The Oranje off the Western Australian coast in 1941, shortly after the completion of its conversion as a hospital ship. The red crosses and green stripes on the white hull were meant to be a conspicuous reminder to enemy vessels of its non-combatant role.

As a unit of the Australian army, Oranje received the title “1st Netherlands Military Hospital Ship AIF”, and its crew were issued with this distinguishing colour patch. The brown background was common to all medical units, while the orange flash was chosen in honour of the Netherlands’s national colour.

One of the well appointed patients’ wards aboard the Oranje